Who hasn’t seen Brad Pitt in the role of Achilles in the magnificent movie Troy? The movie is about the Battle of Troy, a great Greek battle that is supposed to have taken place more than 3,000 years ago. The Battle of Troy is depicted in the classical work the Iliad by the mythical poet Homer (Ilion is another name for Troy and hence the name Iliad).

Brad Pitt in the role of the great hero Achilles either wears a wig or he has had his hair bleached. That may seem strange, because he is playing a Greek hero. The movie isn’t very faithful to the Iliad, but there’s one thing that the film makers have been faithful to and that is the fact that Brad Pitt is blond. Because Achilles is actually blond in the Iliad. And not only Achilles is blond; blond is the most common hair color among the Greeks in the Iliad.

One thing that, however, doesn’t correspond with the Iliad is that Achilles / Brad Pitt is fighting in a hot desert. The sun is constantly shining and Brad Pitt and the other heroes are sweating. They don’t in Homer’s poem the Iliad. There, it’s cloudy and cold. The heroes are wearing wool mantles and sometimes even furs over their shoulders when they’re not fighting. They warm themselves by fires – even though it’s in the middle of summer. Furthermore, they sleep under wool blankets during the supposedly hot Greek summer nights. One of the favorite activities of the supreme God, Zeus, is to snow and hail. He doesn’t seem to be that interested in basking with the sun. Snow and hail is his thing, more like King Bore – God of Winter.

Was it really in Greece that the blond heroes fought in the cold? 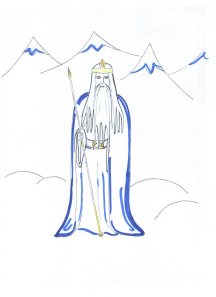 The Iliad and the Odyssey are two of Greece’s most famous works from ancient times. They were created by Homer sometime during the Bronze Age more than 3,000 years ago, but were written down much later, about 2,700 years ago. But already the ancient Greeks don’t seem to have recognized themselves in the works.

In addition to the snow and the blond hair, the Greeks couldn’t make sense of Homer’s geography. Homer has placed lots of islands, sailing distances, coasts, mountains, rivers, and other geographical details completely wrong. While the ancient Greeks scratched their heads, commentators of today have made things easy for themselves. They conclude that there’s so much that’s wrong in the Iliad and the Odyssey that they must be fairy tales and not based on real events. That’s an easy way to ignore if Homer was really bad at geography. And then you can ignore all the other details that don’t correspond with Greece, such as hair color and climate.

There are two solutions. Either, Homer was really bad at geography and made it all up. Or, the Iliad and the Odyssey are based on real events, and Achilles and the other heroes were real people. Because Homer must have gotten his inspiration from somewhere. However, wherever the events took place, they couldn’t have taken place in Greece, even if that’s where the works were finally written down and preserved. But then, where do the stories come from?

The Battle of Troy: a primitive battle in the far north

There is one person who hasn’t made things easy for himself and who has thought about what Homer really says, about geography, climate, and other details, and that is the Italian nuclear physicist Felice Vinci. The world of Homer is incredibly primitive, much more primitive than you might imagine from the movie Troy. In the Battle of Troy, there are no grand stone walls, elegant battle formations, or advanced weapons. Most warriors throw stones and spears. There are raw and violent depictions of wounds and injuries. The attacking Achaeans consist of a coalition of chieftains from different regions. They have flat-bottomed ships, which they pull far up on the beach in something resembling a large, coordinated raid.

The Italian Felice Vinci, who himself comes from the cultural cradle of the Mediterranean, has questioned whether the events in the Iliad and the Odyssey really took place in Greece, and suggests that they instead could have taken place in the far north. He has received much criticism for his theory. It’s easy for the uninitiated to dismiss his arguments as foolish Atlantis theories. But Felice Vinci hasn’t used foolery; he has used two exact sciences as a starting point, climate and geography, and has used them to analyze where the events may actually have taken place. In addition, he has analysed archeological finds, etymology, topography, cultural aspects, among other sciences. He has read, he has calculated, and he has measured. And among all the islands, sailing distances, climate details, and so forth, he has achieved a much better compliance when he places the Battle of Troy far up in the north instead of in Greece. More specifically around the coasts of the Baltic Sea and the North Sea.

Read more: ILION – the day will come when sacred Troy must die